An industry buzzword, influencer marketing capitalises on social media platforms to generate engagement and product ROI. A third of the millennial generation prefer to be on social media and 90% of the young adults aged between 18 to 29 years prefer social media for communication (source). Social platforms have the power to engage and boost brand perceptions, and this is THE only reason why brands prefer to maximise marketing possibilities through social campaigns.

The year 2017 is only halfway through, and we already have case studies of social campaigns which were successful due to their creativity and panache. In this listicle, we will share some of these social media successes.

A relatively new beauty brand, the Glossier marketing strategy strongly depends on Instagram influencers. They partner with various Instagram users for promotion. Their selection criteria are based on the engagement rate of influencers, and not the number of followers. They have a representative program, similar to being a brand ambassador, where selected representatives conduct activities to promote the Glossier brand. In one of their recent activities, 13 representatives were flown to New York City for two days. Among them was Amy Serrano, a vlogger on YouTube, who documented her whole journey and uploaded it on YouTube. The video received strong engagement and comments, which helped to strengthen the brand’s image.

How can you advertise cleaning products with creative infusion? Proctor and Noble own Mr Clean, an American cleaning company, and during the Super Bowl and Valentine’s Day a couple of months back, Leo Burnett of Toronto created a sexy and snappy advert promoting their products. Teasers were released on Twitter and Facebook in the week leading to the Super Bowl. When the ad rolled, it received 11,700 mentions on social media within 1 minute! It’s amazing. Till date, the ad has received over 17 million views. By giving the ad a passionate romantic spin, they capitalised on the essence of Valentine Day as well. You can watch the adhere.

Corrine Ellsworth Beaumont from Worldwide Breast Cancer ideated the Know Your Lemons campaign to raise awareness about breast cancer. The idea is to encourage and help women to identify early warning signs of breast cancer, and the response to the campaign was incredible. The standaloneFacebook page contained updates about the cause, news stories and other awareness programs.  The campaign manager adopted a visual approach, which helped them to target even illiterate people. There was a call to “donate” on the Facebook page,  and as a result, their fundraising page onJustGiving exceeded the fundraising target by 317%.

In March 2017, Ted Baker released a360-degree shoppable video as part of their Spring and Summer marketing campaign. Their used VR technology and multi-social media distribution to create an episodic sitcom with fictional characters where participants could engage with the Meet the Bakers initiative on social channels like Instagram and offline at the Ted Baker stores. It was the perfect intermeshing of online and offline marketing possibilities, with the intent to engross the interested audiences in a storytelling experience, and in the process, enhance the marketing value.

Stranger Things, a Netflix original and the most popular digital original series, is the brand marketing collaborator with Eggo. A new product line from Kellogg’s, Eggo is a frozen waffle, and in the show, one of the lead characters is seen wolfing them down, which gave Eggo an immense brand exposure. Kellogg’s placed a team of Twitter to handle further audience conversations and improve product engagement. The second season of Stranger Things opened with a short clip of Eggo, which gathered 20,000 likes and 10,000+ retweets. Product cross promotion is a strong social marketing tool, and as this campaign proves, Eggo has become quite popular with the younger audience.

Nusret Gökçe is a Turkish chef who found Internet fame with a cleverly designed Instagram campaign, called Salt Bae. He is the owner of a chain of Turkish steak houses. Take a look. 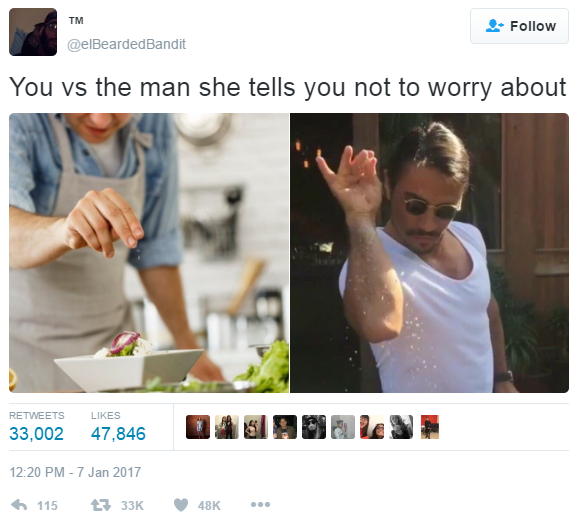 The instant virality of #SaltBae campaign popularised his chain of restaurants, prompting him to open a restaurant in London. One strategic campaign with cost-effective promotion by Nusret Gökçe led him to open a steak restaurant in the heart of London.  In other words, business possibilities abound with a little bit of creative thought.

An athletic clothing retailer based in Vancouver, Ryu used Instagram Stories and Sponsorship to promote their product giveaway. Giveaways are a foolproof method for marketing and creating engagement. Ryu used the #WhatsInYourBag hashtag to promote the giveaway and engage the target audience. Paid marketing highlighted the giveaway, and a repeat loop of Instagram Stories segment helped Ryu to push their marketing goal. It resulted in tons of people participating in the giveaway and helped to create a brand awareness.

The concept of drones is relatively new, and brands like DJI are consciously establishing themselves as industry leaders through quality content publication. Recently, DJI introduced the Phantom 4 Pri drone and partnered with reputed Instagram filmmakers to promote the product. DJI essentially capitalised on user-generated content and the power of videos. DJI consistently shares the potential of its flagship products through aggressive video marketing.

The above screenshot is an example of what a successful video marketing campaign looks like.

In 2016, social media channels evolved from being lead generating platforms to storytelling avenues. The core social media objective shifted and focused on consumer experience. The chart below states the growth of social network users between 2010 and 2019.

There is a growing emphasis on video marketing. Around 1200 marketers participated in a study with the result that 80% of digital marketers will increase their digital spend in 2017, with YouTube and Facebook being the key channels.

The storytelling potential of social media is immense. Is your brand ready for the change?